Hey, what’s up. My name is Joel Young and I’m the owner and creative director here at JumpStart Video. And in today’s video, we’re gonna be answering a question that we get from our clients all the time. They wanna know, is it better to have one long video or multiple short videos? You can see there’s a lot of different ways you can attack this. Video length is one of the most common points of contention or negotiation, or just things to figure out when you’re creating a video campaign. And over 15,000 videos, we’ve seen a lot of patterns. We’ve seen a lot of trends. And we’ve helped a lot of clients navigate this question.

And so, today, we’re gonna tackle this specific idea, that is it better to have a long video or multiple short videos? So let’s use five minutes as an example. Would you rather have one five-minute video or five one-minute videos? That’s the question. And I think the answer is, the straightforward answer is, I would rather you have five one-minute videos, and I’ll spend this video unpacking why, but the first thing I want you to do is imagine your videos as teammates on a team, players on a team.

And since it’s March, since we’re in the middle of the March Madness tournament, let’s think of this as a basketball team, okay? And there’s a lot of basketball dynasties. We’re not gonna sit here and argue over whether MJ or LeBron is the best player of all time, because that’s not a debate, MJ, and we’re not gonna debate all the great dynasties or teams, but what we can agree on is that each team is made up of five individual players. And over the years, coaches and administrators and presidents have tried to figure out is it better to build this team around one great player or have five really average or above average players? That’s what we’re talking about when it comes to video. And so, my question would be, if you were putting together a team, would you want one large player by themselves, or would you rather have five, even average-sized or average-skilled players? And I think the answer’s obvious. It doesn’t matter how big that one person is, right? Five average people could beat that one person.

And in the same way, when it comes to video marketing, you have to realize that one long video is going to limit your influence, even if it’s just one piece of content that has everything in it and it’s so easy to watch. You’re going to have a hard time getting people to convert all the way to the end of that video. If you’re on YouTube, if you’re on any other platforms, check the retention status of your videos. If you get most of your viewers to watch half of your video, you’re doing pretty good. And so, if you have people watch half of a five-minute video, they’re gonna miss the second half of content. But if you have them watch half of a one-minute video, they’re going to get more on that specific subject than they would if it was one long video where they’ll miss entire portions about some other part of your story or piece of information.

And so, I’ve got a couple points here, five points in fact, about what more videos means for you, since we’ve already established that, yes, it would be better for you to have five short videos than one long video, what does that mean for you? Well, it means a couple things.

First off, it means you can put more specific information into each video. This is something we’re seeing in marketing, in trends, in content is that we need to niche down as far as we can. In other words, make your video content as specific as it can possibly be. So rather than making a five-minute video that’s about, kind of about a lot of things, you make a one-minute video that’s really only about one thing. That’s something we say to our clients a lot. Your viewer is going to leave your video with one idea. One idea. You can call them to one action. And the longer your videos are, the more ideas they’re going to contain, and the less your viewer will retain. So you wanna make sure that you can make specific videos with specific information contained within them, so that more of your message is communicated. So that’s the first benefit of more videos versus one long video.

And with more points of contact comes, number three, more spheres of influence. Each one of those videos is going to have a circle of influence around it based on the subject matter, the tags, the title, the specific niche that it’s launched within, the information that it contains. And each one of those sphere of influence is going to reach farther than the influence of just one video. Instead of one sphere, you’re going to have five spheres of influence out there. Let’s call it a multiverse for you Marvel fans, a multiverse of videos out there working for you so that there are more points of contact, more spheres of influence, which lead to, number four, more opportunities for sharing, and the more opportunity for a longer campaign length, meaning that if you’re gonna dump a lot of money into a marketing campaign for a video that you’re creating, wouldn’t you rather dump that money incrementally into five different campaigns spread out maybe over five weeks?

You start with a campaign here, run it for a week. You start a second campaign here, run that for a week, run a third campaign, and so on and so forth. Then you can see which campaigns were most effective. Maybe restart those, or extend those, or add budget to those rather than having just one campaign and it either succeeding or failing and not being able to do anything about it once it’s over.

So more opportunities for sharing longer campaigns, longer drips as we call them, to go out to your customers, your social media followers and your people in your sphere of influence, which leaves us to the fifth and final point of why more videos are better is that they are easier to update.

A lot of our clients come back to us year after year and say, something about this information has changed. We’ve gotta update this information. The change with the times, the statistics have changed. This is no longer relevant. You don’t wanna throw the whole video out. So rather than having to start over or maybe edit a large video, the smaller videos with more specific information give you the opportunity to go in and edit a small piece of information, keep those videos viable, keep them relevant, keep them useful in your world, and overall to help you get the most out of your marketing dollars.

That’s what we do at JumpStart Video. We try to help you get the most out of your marketing dollars with videos you can afford, longer campaigns, and more spheres of influence. So let’s recap for today’s video. If you had the choice between a long video or multiple short videos, I would choose multiple short videos every time for these five reasons. More videos means more specific information in each one, more points of contact when they go out, which means more spheres of influence, and more opportunities for sharing, which makes them easier to update in the future. Those five reasons are why I would stick with shorter videos over multiple than one long video by itself.

Hey, thanks for watching this video. If you’re into video marketing tips, if you’re ready to use video for your business, your product, your service, your organization, to get yourself out there, I hope you look to us as a possibility to help you with that. Video is taking over the internet. And if you’re not posting videos, if you’re not posting content, you’re soon going to be irrelevant. Videos are the website of the past. When people said in the 90s, you need a website to be viable, it turned out to be true. Today, you don’t exist without a website. In 20 years, it’s going to be true that if you don’t have videos out there working for you, you won’t exist. So hopefully we can help you with that.

If you’re interested in more video marketing tips, come back, we can help you with that. We’re gonna post new videos all the time. So again, my name is Joel Young. This has been JumpStart Video’s video marketing tip of the day. Come back and see us or head on over to jumpstartvideo.net. 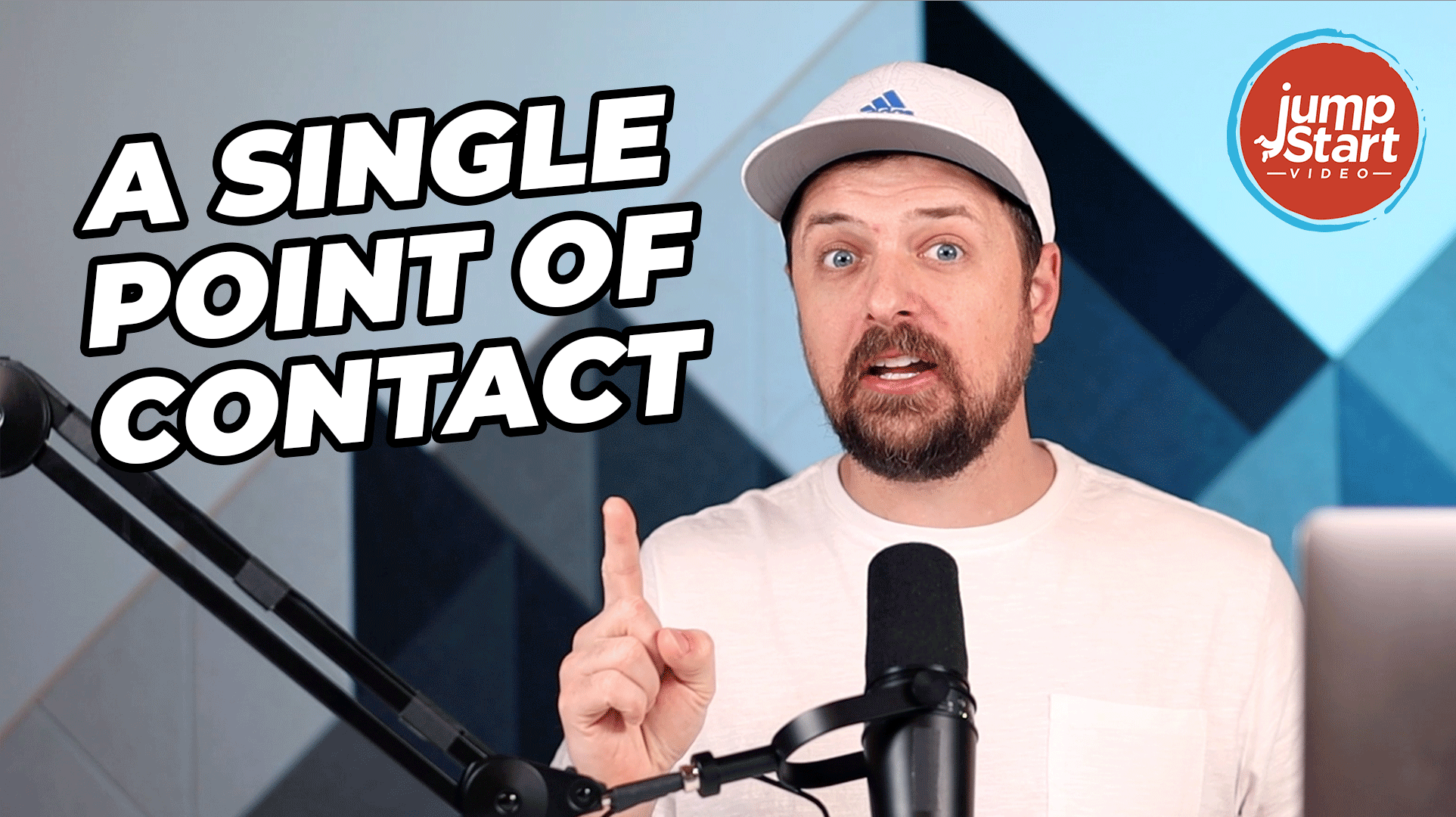 VIDEO: A Single Point of Contact for Every Project